For Further Information,
Email us on...

GRANTS totalling £1,500 have been handed out to eight community groups – and the funding boost will make a “big difference” to lives of people in Worcester.

The donations were announced by the Worcester Lions Club on Tuesday (April 7) during a special ceremony at the city’s guildhall to distribute money raised at the annual Santa’s sleigh fundraiser.

Representatives from the worthy causes joined members of Worcester Lions Club and the Mayor of Worcester to receive their cheques, which ranged £100 to £250, during a “superb” evening.

The successful organisations – including the Make Time Friendship Group, Severn Sounds Festival and St Paul’s Hostel - had applied for funding from the community grant scheme, which has been run in partnership with the Worcester News.

Vinny Day, a member of the Make Time Friendship club which received £100, gave an emotional thank you for the donation during the event.

She said: “I lost my husband after 64 years of marriage and for the last six and half years I rarely left the house because he was in a wheelchair and ill.

“I was absolutely lost and it felt like half of me was gone.

“There is nothing worse than loneliness and my daughter said I should try and find a club to go to.

“I joined Make Time Friendship and have been there ever since. I really enjoy it – going for a drink at the pub, for meals together or visiting the pictures.

“It is a big help for all of those people who are left on their own – I love it. I look forward to it every week and without it I would never get out of the house.”

The group’s grant will help elderly members who struggle financially with transport costs for getting to the weekly sessions on Wednesdays in Barbourne. 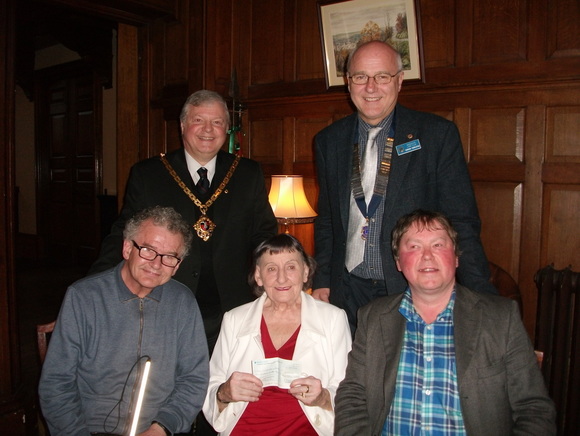 Our friendship club is truly named and is enjoyed by all,
Our leader Jenny’s there to help and always on the ball!
We go to shows and cinemas by coach or mini bus whilst Jennifer tries her very best to fix up trips for us!
We visit castles, historic dwellings and travel out for meals.
Ensuring that she manages to get the best and fairest deals.
Whenever we arrange to meet she’s constantly on the phone maybe someone’s not turned up!
-needs transport there from home!
It’s sorted out in no time and then we’re on our way.
We’re hoping that we all will have a fine and sunny day!
She advocates a food pack in case we miss our lunch.
To be quite honest with you, we’re quite a happy bunch!
In the New Year we met at the Diglis Hotel then departed to garden to chat and to
tell our friends how we spent our Christmas break.
And enjoyed the New Year for auld langs synes sake.
The following week was skittles at alley no skittles were played but we all got quite pally.
With the day ending up with drinks and some chat this meeting passed quickly so that was that chat!
The Droitwich centre rooms we found were no good so everyone left to search for some food!
Very few turned up for skittles to day so the match was ditched unable to play!
The following week we met in our hall a new member was welcomed by one and all
Who was settled by Jenny near David and Paul
A talk on bereavement was given by Miss Street
Received with much interest and very complete!
The Tudor House visit was good and well done
We afterwards went for some tea and a bun!
Jenny and Jean took over today suggesting desert island discs they would play
But warned they were amateurs don’t expect too much!
But they managed quite well with professional touch!
Some sang to thee records and seemed very content to talk about this unusual event.
A talk about gardening was discussed by our group
To end untidy hedges and cure blossom droop!
Were shown several plants and were shown how to prune
We enrolled two new members called Vinny and June
A slide show on owls was arranged for us all
At our sharman close venue in our usual hall
A film show most splendid was given by Roy
Re. the female barn owl when choosing a boy!
19 members arrived at the hive for a tour
Snacks and drinks were consumed and we chatted for sure!
Thumbs down was the signal we gave for this tour
Glad it was home time of this we were sure
Have a nice cuppa rest all our backs.
Thankful for home where we can relax!
At Kidderminster carpets we saw a rug made on an old spinning wheel the colour was jade!
We were allowed to inspect and feel its soft touch
The visitors praised the weaver so much!
In future said Jenny when we met her today
All meals at the Alma must be booked – no delay
Before settling down our skittles to play!
Mr Robin Walker entertained us this morn
With a talk on his job he starts every dawn!
His father too did the same job of work
Never failed in his duty or problem to shirk!
He taught him to cope with a real angry mob and the best way to deal with this important job!
A slide show was next on the list at the hall
The theme of the show he was filming and giving
Was the lives of the boatmen and how they were living
Describing the scene as he showed every slide
Mr Draper commented on the River Wye’s tide
We saw lots of boats along with their loads using the water ways instead of the roads!
The show ended quickly time had run out
But the show was fantastic without any doubt!
A visit to Highgrove was arranged for us all
Where Prince Charles resides in building tall
With well stocked gardens surrounded by wall
Safe and secure from the public’s eye
Plus lorries, cars, buses, which all pass by!
The weather was fair the sun shining through,
It was quite a nice trip – now our home coach is due.

Christmas in Bournemouth with the club members, Vinny in fancy dress as a pirate,
Powered by